SEOUL, SOUTH KOREA - Media OutReach - 3 December 2019 -Twitter and Mnet Asian Music Awards (MAMA), one of the biggest music awards shows in Asia, has joined hands to engage K-pop fans worldwide on Twitter. This year, MAMA will bring the star-studded event closer to fans around the world with four global activations on Twitter: the red carpet 360 and livestream, the #TwitterBlueRoom 'Thank You stage', the Star Countdown video series, and Worldwide Fans' Choice voting. Fans can also join the #2019MAMA and #MAMARedcarpet conversations on Twitter with customized emojis using both hashtags.

From voting for their favourite K-pop artistes and bands to keeping updated on the live events; Twitter is the best place for global K-pop fans to participate in the 2019 MAMA event experience, find out what's happening in real-time, and to talk about it with other K-pop fans. 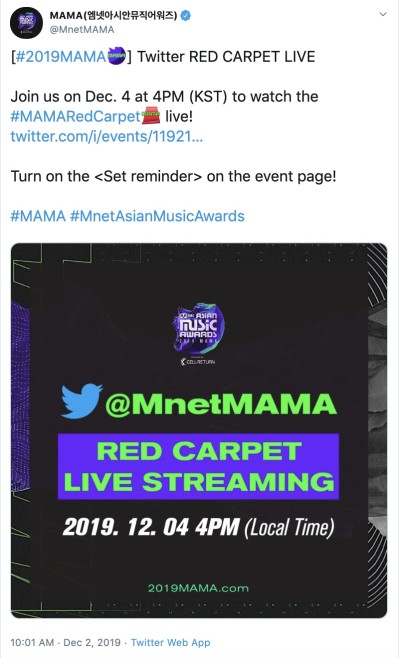 Here are the best ways for fans to get real-time views of their favorite K-pop artistes/bands at 2019 MAMA:

Leading up to the highly anticipated event, @MnetMAMA gives K-pop fans worldwide the opportunity to hear from their favourite K-pop artists with the Star Countdown video series. K-pop idols are asked to share their MAMA experiences throughout the years, or participate in entertaining challenges. For instance, MONSTA X (@OfficialMonstaX) and TWICE (@JYPETWICE) were challenged to complete a two-line acrostic poem using the hashtag #MAMA, displaying their wit and sense of humor on Twitter. 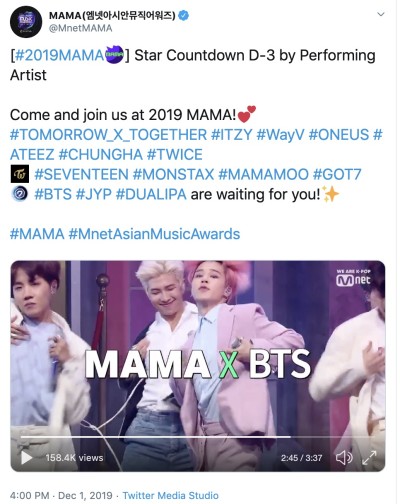 Voting for MAMA has begun from October 24, 18:00 (KST) and will end on December 3. This voting process is hosted on the official MAMA website: 2019mama.com. Fans who want to vote for Worldwide Fans' Choice on Twitter are required to include both the #MAMAVOTE hashtag and the artistes/bands' official hashtag (#ARTISTNAME) within their Tweet for their votes to be considered valid. Furthermore, fans across the world will get to decide the results of major awards categories including "Artist of the Year" and "Song of the Year" via the official MAMA website: 2019mama.com.

The red carpet will start on 16:00 (JST) and Award show of the 2019 MAMA will start on 18:00 (JST) on Wednesday, December 4, 2019 at Nagoya Dome in Japan with an all-star artiste line-up including BTS (@BTS_twt), Chungha (@CHUNGHA_MNHent), Dua Lipa (@DUALIPA), GOT7 (@Got7Official), MAMAMOO (@RBW_MAMAMOO), MONSTA X (@OfficialMonstaX), SEVENTEEN (@pledis_17) and TWICE (@JYPETWICE). Follow the official @MnetMAMA account right now to get real-time updates about the awards show and the K-pop artistes/bands attending the event. The @MnetMAMA account will also host multiple fan giveaways, where K-pop fans worldwide will stand a chance to win tickets to 2019 MAMA, signed CDs, and 2019 MAMA merchandise.

Twitter, Inc. (NYSE: TWTR) is what's happening in the world and what people are talking about right now. On Twitter, live comes to life as conversations unfold, showing you all sides of the story. From breaking news and entertainment to sports, politics and everyday interests, when things happen in the world, they happen first on Twitter. Twitter is available in more than 40 languages around the world. The service can be accessed at twitter.com, on a variety of mobile devices and via SMS. For more information, visit about.twitter.com or follow @TwitterKorea. For information on how to download the Twitter and Periscope apps, visit twitter.com/download and periscope.tv.