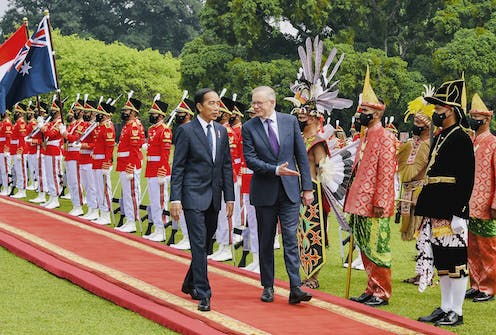 Indonesia may be the world’s fourth most populous nation – with more than 270 million people – but Australian news coverage of it typically involves three things: beef, boats and Bali.

Anthony Albanese’s visit to Indonesia in his third week as prime minister is an important sign the relationship can’t be defined by domestic concerns about asylum seekers, live cattle exports and drug smuggling.

Accompanied by Foreign Minister Penny Wong (who speaks Bahasa) and Science and Innovation Minister Ed Husic (whose Muslim faith was of interest to the Indonesian press), Albanese has made it clear Indonesia is of utmost diplomatic importance to Australia.

Read more: 'Mutual respect and genuine partnership': how a Labor government could revamp our relationship with Indonesia

Albanese has followed a recent tradition of Australian prime ministers heading to Jakarta early, before London or Washington. His predecessor, Scott Morrison, visited Indonesia in September 2018 as his first port of call. So too did Malcolm Turnbull and Paul Keating.

Evidence from the 1600s shows the indigenous fishers of Arnhem land traded sea cucumber and other goods with counterparts from Makassar – on the island now known as Sulawesi – which the Makassarese then sold to Chinese merchants. Makassar remains an important port, which Albanese visited after meeting Indonesia’s President Joko Widodo at his presidential palace.

Read more: Long before Europeans, traders came here from the north and art tells the story

Supportive from the beginning

Australia’s interest in close ties with Indonesia were established immediately after the second world war.

Future President Sukarno and Vice-President Mohammad Hatta issued their Proclamation of Indonesian Independence on August 17 1945, six weeks after the surrender of the occupying Japanese.

By November 1945, an Australian diplomatic mission headed by William MacMahon Ball was in Jakarta (then still called Batavia) to meet with them and other independence officials.

Economist Joe Isaac, who would go on to become deputy president of the Australian Industrial Relations Commission and deputy chancellor of Monash University, was part of the delegation. He later recalled the meetings with Sukarno:

Mac [MacMahon Ball] outlined the purpose of his mission […] and that Australia was sympathetic to the political aspirations of the Indonesians; and he canvassed Sukarno’s reaction to the despatch by the Australian Government of a boat load of medical supplies. No doubt thinking of the action of the Australian waterside workers (who refused to load Dutch ships hostile to Indonesian independence) Sukarno expressed gratitude for the support of the Australian people.

This support was a big deal at the time (the Netherlands only gave up attempts to reassert its colonial control in 1949). According to Isaac, the action of the waterside workers against Dutch ships as well as Australia’s support for Indonesian independence in the UN Security Council were instrumental in shaping a positive view of Australia in Indonesia.

A newspaper report from September 29 1945 about a rally in Sydney in support of Indonesian independence. Daily Telegraph/ivens.nl, CC BY

Australia’s desire for close relations with Indonesia has been challenging – in particular over Indonesia’s annexation of West Papua in 1969 and of East Timor in 1975.

But in recent decades there have been some great occasions of economic co-operation.

During the Asian financial crisis of 1997-99, Australia went into bat for Indonesia against the International Monetary Fund (IMF) and the Clinton administration, which both wanted to impose severe fiscal austerity measures.

Australia favoured more expansionary policies – partly informed by Reserve Bank deputy governor Stephen Grenville, who had been a diplomat in Indonesia and understood the Indonesian economy.

The Australian view prevailed, and the Indonesian economy fared much better as a result, avoiding the pitfalls of the developing economies subject to the IMF prescription.

As of 2020, Indonesia is Australia’s 13th biggest trading partner, worth A$17.8 billion in two-way trade.

But in many ways Indonesia is still underdone as an economic partner – not just when compared with China and India, and our longstanding partners in Japan and South Korea, but also with southeast Asian neighbours Singapore and Thailand.

More Australian small and medium sized companies export goods to Fiji than Indonesia. And despite Indonesia’s massive population, just 250 Australian companies have a presence in Indonesia. This compares to more than 3,000 in China.

Read more: It's great Albanese is in Indonesia, but Australia needs to do a lot more to reset relations. Here are 5 ways to start

So, there’s still a great potential for Australian trade and foreign investment to help build capacity way beyond boats, beef and Bali.