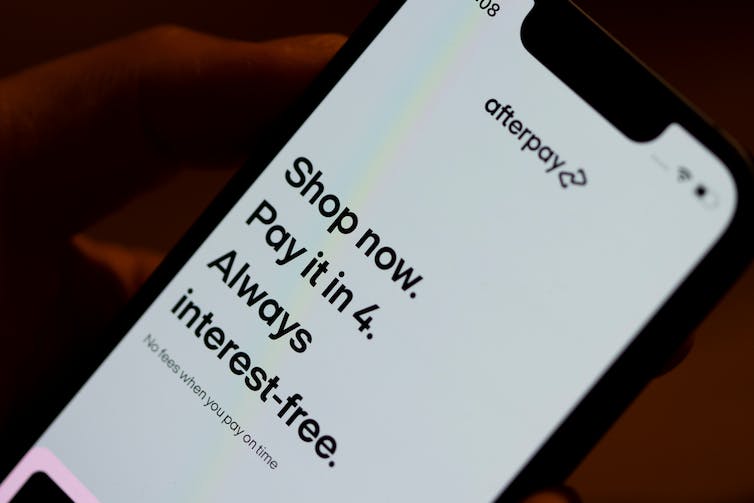 Buy now, pay later (BNPL) companies were among the stock market darlings of 2020 – and nowhere more than in Australia, the birthplace of pioneering companies Afterpay and Zip Co. There are 15 BNPL companies listed on the Australian Securities Exchange (ASX), more than any other exchange in the world.

But if you took a punt and bought shares in any of them over 2021, there’s a good chance you’ve lost money.

The state of the sector isn’t as bad, however, as suggested by news reports claiming stock have plunged an average of 80% in 2021. Those reports reflect calculations from peaks, mostly in February, that were part of a wider tech-stock bubble and were not sustainable.

A more realistic picture comes from comparing values from before that frenzy.

The best performers were Fatfish Group Ltd and Novatti Group, followed by Afterpay, whose share price was up about 15% from November 30 2020. (Afterpay is now Australia’s 15th most valuable stock, with a market capitalisation of about A$32 billion.)

The worst performers were Splitit and Laybuy Holdings, down almost 80%.

These numbers are less headline-grabbing than those reports of the whole sector falling 80%, but they still significant. They reflect some hard truths about the BNPL market.

Demand for these services isn’t growing as strongly as expected. Competition is stiff. Profitability is the exception. And greater regulation looms, with growing concerns about the buy now, pay later model encouraging customers – especially younger people – to get into debt.

A new line of credit

Credit services have been around for decades. Afterpay and its rivals revolutionised the market by developing digital technology to make it very easy to sign up (automating credit checks to make approval almost instantaneous), and devising a revenue model built on charging merchants a transaction surcharge and customers late fees.

By not charging interest payments, BNPL companies are not subject to the same regulation under the National Credit Code as credit providers such as Visa or American Express.

Read more: What's the difference between credit and debt? How Afterpay and other 'BNPL' providers skirt consumer laws

The Australian Securities and Investments Commission, which regulates financial services, has expressed concern about BNPL services being more likely to create “unhealthy spending behaviours”. Which is bad for consumers, but potentially good for profits.

Afterpay, which listed on the Australian Securities Exchange in 2017, is now Australia’s 15th most valuable public company by capitalisation. Shutterstock

Yet profitability in the sector has been surprisingly rare, despite stellar growth in BNPL user numbers and transaction values.

But in the 2020-21 financial year, just two ASX-listed BNPL companies – Humm Group and Credit Intelligence – made a profit.

Afterpay’s revenue grew 78% to $924.7 million but it made a loss of $159.4 million (compared with $22.9 million the year before). Zip Co more than doubled sales revenue but reported a $653 million loss, compared with $19.94 million the previous financial year.

Contributing to this lack of profitability is not just competition between the BNPL companies but also from financial giants muscling into the market. For example, Commonwealth Bank launched its StepPay offering in March, while PayPal announced its Pay in 4 service in July.

Despite the lack of profit, BNPL stocks benefited from the global surge in trading in tech stocks that followed market lows of April 2020. This reached fever pitch in February 2021 amid the Gamestop frenzy, when retail investors drove the price of the US-based video games retailer up 1,500%.

Read more: GameStop: how Redditors played hedge funds for billions (and what might come next)

What goes up must come down.

Finance studies show investor attention may temporarily pump up stock values, but prices will revert to fundamental levels in the longer term. This looks like the case with BNPL stocks.

Sensible investors should also be factoring in the potential for greater regulation of the market. Afterpay’s move into pubs – “beer now, pay later” – has again focused attention on concerns previously flagged by the Australian Securities and Investments Commission and the 2018 Senate committee inquiry into credit and financial services targeted at Australians at risk of financial hardship.

In October, a Reserve Bank of Australia report concluded it would be in the public interest to remove BNPL provider rules that prevent merchants from charging customers for the surcharge paid by the merchants.

Read more: How to know if your online shopping habit is a problem — and what to do if it is

Currently the cost of this surcharge is effectively spread among all customers. The Reserve Bank’s research suggests 60% of BNPL users would be put off if they had to explicitly pay this charge. While the central bank made no specific proposal, the federal government may choose to act on this in the future.

But it’s not all grim news for these companies. As in any market, some will succeed, others won’t. It depends on how they respond with new products, such as small business loans, partnership with banks, virtual BNPL cards that can be used anywhere, and rewards programs.