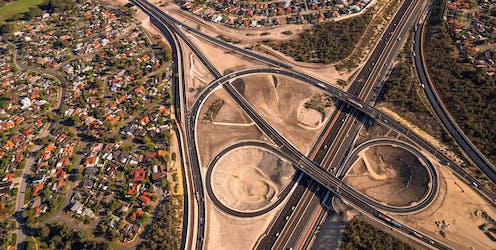 It cost A$49 million to add 12.5 kilometres of extra lanes to Western Australia’s Kwinana Highway, south of Perth’s CBD. That’s not unusual. On average, building a single lane of road costs about about A$5 million per kilometre.

What is unusual about this stretch of extra freeway is not the money but the materials beneath the bitumen: two stabilising layers comprised of 25,000 tonnes of crushed recycled concrete, about 90% of which came from the demolition of Subiaco Oval (once Perth’s premier football ground).

Recycling building and construction materials remains the exception to the rule in Australia. The National Waste Policy agreed to by federal, state and territory governments has a target of 80% resource recovery by 2030. It’s currently about 40%.

Most of this waste – concrete, brick, steel, timber, asphalt and plasterboard or cement sheeting – could be reused or recycled. It ends up in landfill due to simple economics. It’s cheaper to buy new materials and throw them away rather than reuse and recycle.

Changing this equation and moving to a circular economy, in which materials are reused and recycled rather than discarded in landfill, is a key goal to reduce the impact of building and construction on the environment, including its contribution to climate change.

Read more: A third of our waste comes from buildings. This one's designed for reuse and cuts emissions by 88%

The economics of ‘externalities’

The fact it is more “economic” to throw materials away than reuse them is what economists call a market failure, driven by the problem of “externalities”. That is, the social and environmental costs of producing, consuming and throwing away materials is not reflected in the prices charged. Those costs are instead externalised – borne by others.

In such cases there is a legitimate – and necessary – role for governments to intervene and correct the market failure. For an externality such as carbon emissions (imposing costs on future generations) the market-based solution favoured by most economists is a carbon price.

Read more: COP26: cities create over 70% of energy-related emissions. Here's what must change

For construction material waste, governments have a few more policy levers to help create a viable market for more recycling.

One way to make recycling more attractive to businesses would be to increase the cost of sending waste materials to landfill. But this would likely have unintended consequences, such as illegal dumping.

The more obvious and effective approach is to help create more demand for recycled materials through government procurement, adopting policies that require suppliers to, for example, use a minimum amount of recycled materials.

With enough demand, recyclers will invest in further waste recovery, reducing the costs. Lower costs in turn create the possibility of greater demand, creating a virtuous circle that leads to a circular economy.

Australian Government, Sustainable Procurement Guide: A practical guide for Commonwealth entities, 2021 Australia’s federal, state and territory governments all have sustainable procurement policies. The federal Sustainable Procurement Guide states the Australian government “is committed to transforming Australia’s waste into a resource, where most goods and services can be continually used, reused, recycled and reprocessed as part of a circular economy”. But these policies lack some basic elements. Three key market-making reforms Our research suggests three important reforms could make a big difference to waste market operations. This is based on interviewing 27 stakeholders from the private sector and government about how to improve sustainable procurement. First, government waste policies that set aspirational goals are not supported by procurement policies setting mandatory minimum recycled content targets. All contractors on government-funded construction projects should be required to use a percentage of recycled waste materials. Second, the nature of salvaging construction materials means quality can vary significantly. Cement recycled from a demolition site, for example, could contain contaminants that reduce its durability. Read more: Australia needs construction waste recycling plants — but locals first need to be won over Governments can help the market through regularly auditing the quality of recycler’s processes, to increase buyer confidence and motivate suppliers to invest in production technologies. Third, in some states (such as Western Australia) the testing regimes for recycled construction products are more complex than that what applies to raw materials. More reasonable specifications would reduce compliance costs and thereby the cost of using recycled materials.