Last year’s post-budget photo ops were all heavy machinery and hard hats. But this year we can expect soft-focus shots with children and the elderly.

The big story of the budget is not just that the government is spending tens of billions more as we emerge from the recession; it is also the major shift in what the money will be spent on.

The change in fiscal strategy – from a “construction-led recovery” last year to a concerted emphasis on women and the care sector this year – is based on solid economic advice.

It has also come at the best possible time for a government that has been in the spotlight for underfunding aged care and mental health, and under pressure to do more to support women’s economic participation.

The treasurer was understandably eager to emphasise the Government’s new spending initiatives. And the shift is notable.

But while there is welcome progress, the budget falls short of delivering big structural reforms that are needed for childcare, aged care, and mental health.

For childcare, the government has announced an extra $1.7 billion over three years starting from July 2022, a modest boost to the $9 billion the government spent last financial year.

We proposed a more ambitious package, which would have spurred big economic gains from higher female workforce participation.

The budget falls short of that, but it is still well targeted at the families that face the most crippling out-of-pocket childcare costs: those with two or more children under six in care. 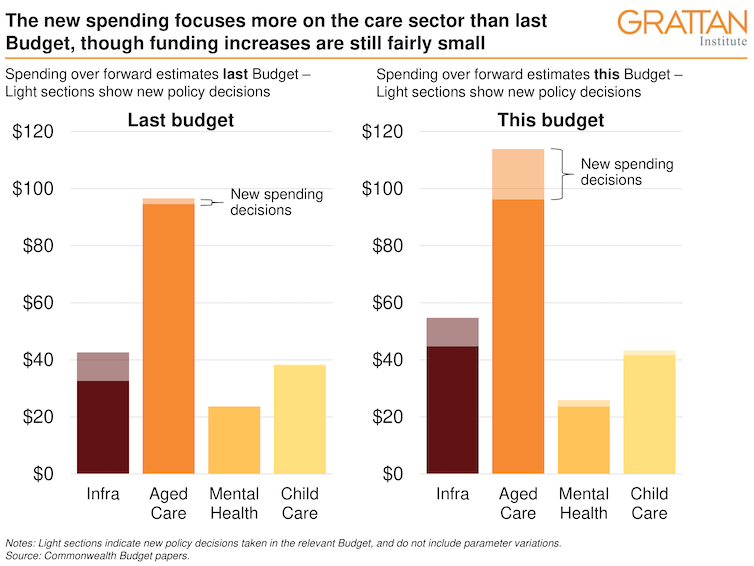 For aged care, there is an extra $17.7 billion over four years, a significant increase to the $22.5 billion the government spent last financial year. While not enough to deliver the Aged Care Royal Commission’s vision of a full rights-based model – where every Australian is entitled to the care they need – it still offers improvements. Read more: Budget splashes cash, with $17.7 billion for aged care and a pitch to women The 80,000 new home care packages will help to reduce waiting times, and the boost to front line care minutes and the Basic Daily Fee provides additional support to those in residential care. The accompanying focus on attracting, training, and up-skilling staff is particularly welcome given that the Royal Commission anticipates future staff shortages, although the Budget doesn’t have much specific to say about pay in the sector. Read more: View from The Hill: Frydenberg finds the money tree For mental health, a sector whose problems have been laid bare by increased demand for services during the pandemic, there is an extra $2.3 billion over four years. Funding is targeted towards expanding access to mental health services and bolstering suicide prevention, but it falls short of the system reform required. A women-centric makeover The budget flags $3.4 billion over four years for women’s measures (including childcare). Outside of childcare, the biggest are for women’s health ($365 million) and spending on women’s safety including and violence prevention ($1.1 billion). These measures, particularly the increased spend on front line and response services for family violence are important and significant. But the more significant shift for women comes with the recognition that job-creating budgets need to invest in a broader range of jobs including in services sectors. About 80% of Australians work in services (and 90% of working women), so investing in these jobs ensures a broader recovery than the previous hard-hat focus. Read more: Frydenberg spends the budget bounty to drive unemployment down to new lows While last year’s Budget ran hard on infrastructure and investment tax breaks that favour capital-intensive sectors, this time around there is a stronger focus on care economy jobs through the spend on aged care, childcare and mental health. Even the extended JobTrainer scheme receives a care-centred makeover, with an additional 33,800 low fee and free training places set aside to support future aged care workers. Services sectors hit hard by COVID also receive some cash including the already announced $1.2 billion support package for the aviation and tourism sector and $300 million for the creative and cultural sector. Universities again miss out but private education providers also receive additional supports. The long-term challenge Other major measures in the Budget include the rollover of the Low and Middle Tax Offset (the ‘lamington’) for another year – delivering up to $1080 into the hands of low- and middle-income taxpayers next year – and extension of two key business tax measures: instant expensing and loss carry backs – focused on bringing forward business investment. The challenge is that much of this increased spending is permanent. And when combined with the impact of COVID on migration and on the size of the economy, this leaves the medium-term forecasts looking markedly different to the (probably unrealistic) ones that voters were served up before the 2019 election. 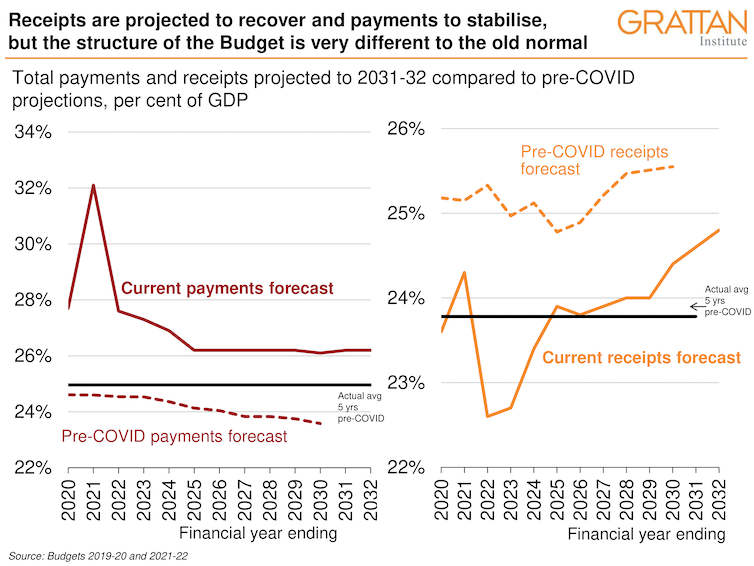 But, as the Parliamentary Budget Office suggested a fortnight ago, even with this shift, Australia’s debt levels are sustainable and are likely to remain so. Net debt is forecast to stabilise and then fall over the medium term, even with continuing deficits. This doesn’t mean that long-term structural challenges disappear, but it does mean that there is more breathing space for the government to let voters see its softer side. As an economic as well as political strategy, it makes a lot of sense.