These polls are not just abstract information. By telling prospective voters who is the most likely to win, can they influence the result of the election by playing a role in the voters’ decision? The evidence says yes, and it most likely favours Biden.

In theory, you could imagine two possible effects of polls. First, a momentum effect. Second, an underdog effect.

A momentum effect could benefit the candidate either leading or gaining in the polls. It can motivate their supporters to vote (the bandwagon effect) and demotivate the supporters of the other candidate (the discouragement effect). 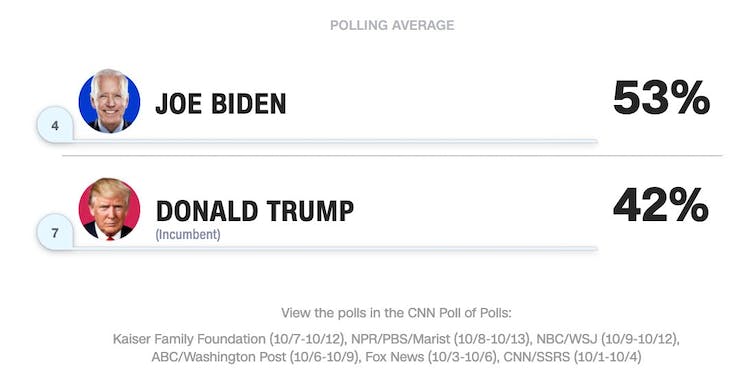 An underdog effect, on the other hand, could penalise the leading candidate. This is because supporters think it’s a done deal and don’t mobilise to vote (resting on their laurels) or because the supporters of the trailing candidate are motivated by the idea of losing (a back-to-the-wall effect).

These different effects tap into some of our intuitive psychology. It is therefore hard to know the net effect of polls.

Some evidence points to the possibility of an underdog effect when a party is just behind. This was the case in 2016, when Trump edged out Hillary Clinton in key states despite her lead in national polls. But the overwhelming message from the relevant research is that positive polls increase a candidate’s chance of winning.

Momentum effect: it helps to be ahead

A similar effect has been observed in real elections.

Using polling and voting data from French elections, my colleagues and I have looked at how those yet to vote were influenced by early exit polls giving a fairly precise prediction of the result.

France has the longest election day in the world, due to its overseas territories in the Pacific. When the first exit poll is released at 8pm in Paris, for example, it is just 9am in Tahiti, where people are still to decide if they will vote and for whom.

A similar momentum effect has been discerned in Britain. Before 1918, general elections were held over a two-week period. The side ahead in the first days of the election tended to benefit from an increasing advantage, which peaked on about the eighth day of voting.

In the United States the possibility of such an effect of early information has been discussed as the “West Coast effect”, whereby voters in California and other western US states can be influenced by early results from the east coast, three hours ahead. 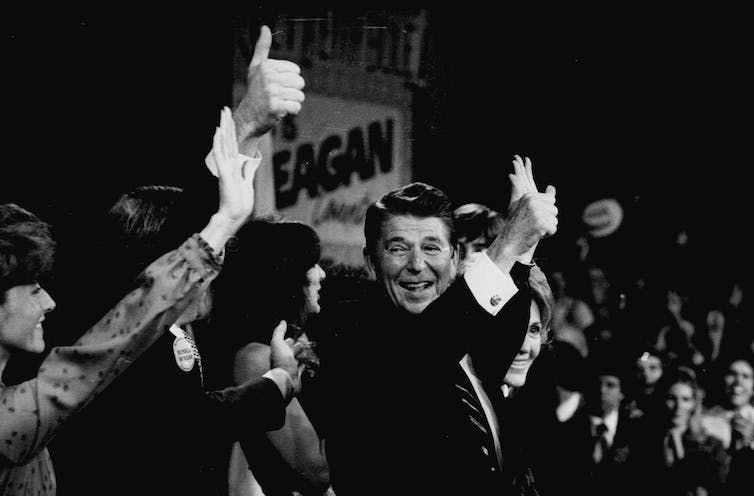 The polls were still open in many western states at the time. Research found this early call had a discouraging effect on prospective Democrat voters, making them less likely to vote.

Given this converging evidence, it is no surprise partisan organisations tend to use favourable polls to push a winning narrative to their support base.

As a consequence of polls’ possible strategic effect, polling companies are tightly regulated in modern democracies. Polling companies do not tend to produce polls that skew results for partisan reasons. Whatever errors occur tend to be due to flaws in polling methodology, rather than being deliberate.

Read more: How might the campaign’s endgame be disrupted? Here are five scenarios, drawn from the history of election polling

However, people who want to influence the public narrative about who is winning can influence something: betting markets.

These are used to estimate the candidates’ winning chances. On these markets, people can put their money where their mouth is, and bet on the candidate they think will win. 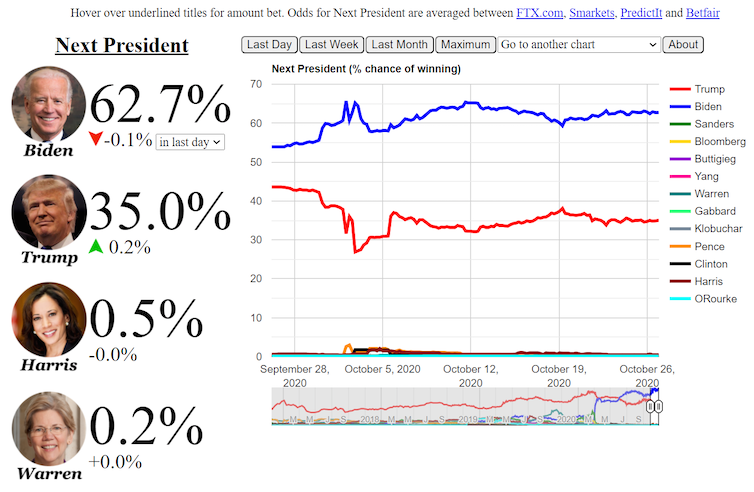 But what if someone is willing to put a lot of money on a candidate they want to win, in a bid to skew the market predictions?

There is an incentive to manipulate betting markets’ prices, to influence voters by suggesting a candidate’s prospects are better than they actually are.

Research and experiments have shown that, in theory, such markets can be manipulated to move prices in one direction.

To do so in the real world would likely require spending many millions of dollars, But given the huge amounts spent in US campaigns, such expenditure is feasible.

Read more: Vital Signs: for the best election predictions, look to the betting markets, not the opinion polls

In 2020, Trump’s chances have been surprisingly high in betting markets given the polls. What does research say about this fact?

In past research, I have found political betting markets tend to be biased toward 50%. That is, they tend to say the race is closer to 50/50 than it is. This bias is larger than on other types of betting markets (such as sports) – and would be expected if manipulators try to influence the prices.

I estimate the 35% chance these betting markets are giving to a Trump win may be skewing the results by 15 percentage points – meaning Trump more accurately has a 20% chance of victory.

For more accurate predictions, therefore, you are better looking at those from professional forecasters, such as Five Thirty Eight and The Economist. In these forecasts Trump has only 5-12% chance of winning. Importantly, Biden’s advantage appears much firmer than what Clinton had in 2016. 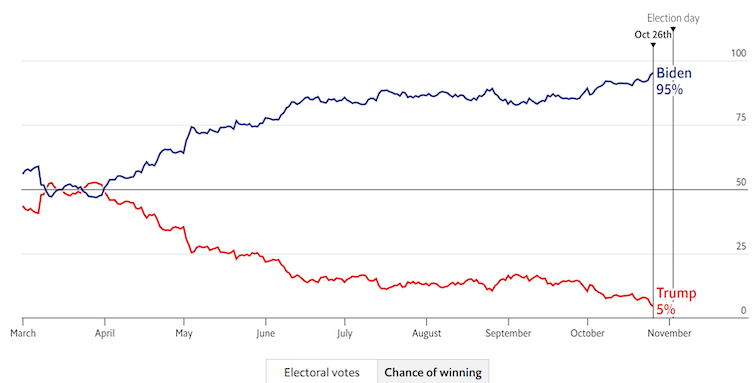 Forecast from The Economist: Winning chances of each candidate.

But even these predictions may be overestimated. As pointed out by one of the best forecasters in the US, Columbia University statistician Andrew Gelman, professional forecasters have an interest in hedging their bets to preserve their reputation.

These low forecasts have a striking implication. Putting money on Biden now is a relatively safe bet. It may also help move the betting market predictions in Biden’s favour.