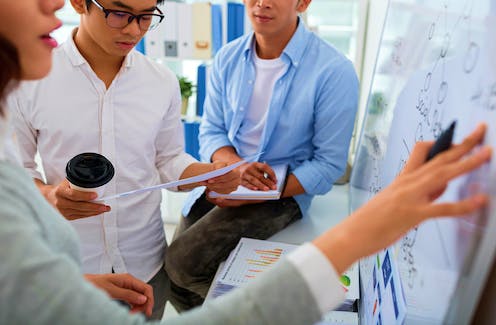 As we emerge from the lockdown phase of the pandemic, there are many lessons to learn. One is that when given credible warning of an existential threat, it is better to act early and risk doing too much than to delay acting and face a much bigger and harder to solve problem when the warnings turn out to be correct.

While the pandemic will pass, one way or another, the problem of global heating, and its many consequences, is going to be with us for the rest of our lives, and those of our children and grandchildren.

Already the world has had decades of warnings, and has done little to heed them.

To hold the increase in global temperatures to 2⁰C, the world needs to reduce emissions of carbon dioxide by 25% over the next decades, and cut them to zero by 2050.

Read more: To get out of this well we are going to have to think like central planners

Current commitments are inadequate to achieve this.

In Australia’s case, the unjustified use of “carryover credits” means the government is actually proposing an increase in emissions over the next decade, with even larger increases likely in the future.

Quite simply, there is no way of prevent catastrophic climate change unless we stop burning coal to generate electricity, and do it sooner rather than later.

As of 2020, coal-fired electricity generation is the only major use of carbon-based fuels for which we have a well-developed and affordable alternatives.

For most other uses of carbon-based fuels, alternatives rely on using electricity, as in the case of electric vehicles and “green” hydrogen.

These alternatives are helpful only if the electricity that powers them is coal-free.

Read more: Australia listened to the science on coronavirus. Imagine if we did the same for coal mining

But in Australia, any move to break with thermal coal runs up against the claim that jobs in coal mining and coal-fired power are essential for workers and for communities.

It is a claim I examine in a new report published by the Australia Institute entitled Getting off coal: Economic and social policies to manage the phase-out of thermal coal in Australia.

It finds that a transition from thermal coal mining could be managed fairly, without significant job losses and while protecting coal-dependent regions.

Contrary to widespread perceptions, thermal coal mining is not a major employer, and most workers in the industry are not miners in the ordinary understanding of the term.

Since Australia’s coal output is roughly evenly divided between coking and thermal coal, it seems likely that about 20-25,000 are employed producing the thermal coal that is used for heating and electricity generation.

This compares with a Bureau of Statistics estimate of about 26,850 in renewable energy. A successful transition to a decarbonised electricity sector would require at least a doubling of the current growth rate of renewables, implying more than 26 000 new jobs.

Many of the jobs are transferable

Many of the people employed in coal mining in February 2020 were not miners in the ordinary sense of the term. About 14% worked in white collar (managerial, professional and clerical) jobs.

A large portion of the remainder, such as carpenters, truck drivers and labourers, worked in trades not tied to mining.

The exception is the category known as Drillers, Miners and Shot Firers, which accounts for about 20% of total mining employment. If the same proportion applies in coal mining, there would be around 5,000 specialist drillers, miners and shot firers in producing thermal coal.

A transition program for these workers could be funded for less than the government’s recently announced HomeBuilder.

The wages high, but the conditions are bad

Advocates of coal mining point out that coal mining generally pays higher wages than other industries, including the renewable energy industry. This partly reflects high levels of unionisation, which could be encouraged more broadly.

An indication that the wages earned by workers in the mining industry represent compensation for poor conditions can be derived from evidence on workforce turnover.

The mining industry is characterised by annual turnover of 20% to 30%, substantially higher than that for the labour market as a whole.

And much of the employment isn’t local

Largely because of fly-in, fly-out, the number of communities that depend on coal as the primary source of their local employment is small.

Moreover, in many cases, these communities, such as those of the Bowen Basin, are well endowed with solar and wind resources.

With appropriate planning (instead of the current chaos in electricity policy) these communities could be given priority in the development of utility-scale solar and wind generation, along with the necessary transmission links.

The result might be be a net gain in local employment.

Read more: Interactive: Everything you need to know about Adani – from cost, environmental impact and jobs to its possible future

On Monday the Minerals Council of Australia announced a Climate Action Plan, proclaiming the need for action to reduce the risks of human-induced climate change and expressing support for “world-wide decarbonisation”.

What it did not do was suggest that the 25,000 or so Australians who work in coal mining could be switched to other industries.

That has been the conventional wisdom for some time – that a switch of 25,000 jobs from one industry to another would be too much for Australia to handle.

Yet when the coronavirus hit, we shut down industries employing three million Australians overnight, and dealt with the economic consequences impressively.

We have demonstrated our capacity to do the same for the much more dangerous, if less immediate, risk of catastrophic climate change.