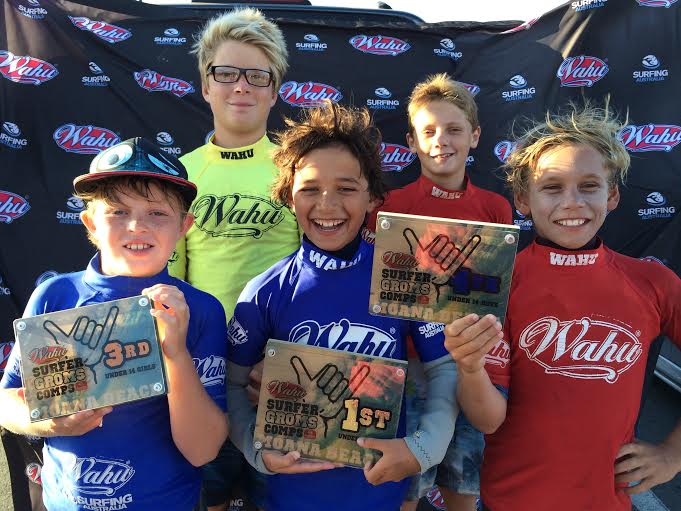 Middleton / South Australia – 18/2/2015: Surfing stars of the future will be on show this weekend as the Wahu Surfer Groms Comps heads to Day Street Beach in Middleton, South Australia.

Close to sixty competitors are expected to compete in the one-day event, which will see some of the nation's most promising young surfers competing for a range of prizes, both in and out of the water.

Early swell forecasts indicate that fun summer like conditions will be on offer on Saturday, providing ample opportunity for the competitors to shine. Competition will commence at approximately 08:00am.

Regarded as one of the major stepping stones in the development of young Australian surfers, the 10-event Wahu Surfer Groms Comps caters for surfers from Under 8 to Under 14 and will be held in New South Wales, Queensland, Victoria, Western Australia, South Australia and Tasmania. The Under 8 will be a mixed division with parent assists, while competition will be held in both boys and girls in the Under 10, Under 12 and Under 14 divisions.

As an added bonus, the respective winners of the Under 14 boys' and girls' divisions from each event will receive an invite to attend an all-expenses paid, three-day Wahu Surf Camp at the Hurley Surfing Australia High Performance Centre.

The Wahu Surfer Groms Comps have helped to launch the careers of many of Australia's most promising junior surfers.

A qualified chef will also be firing up the Everdure barbie making sure the hordes of grommets and staff don't go hungry with the Everdure Sausage Sizzle feeding the crew on both days of competition.

For further event information be sure to check out Facebook (Surfing South Australia) or our website www.surfingsouthaustralia.com.au