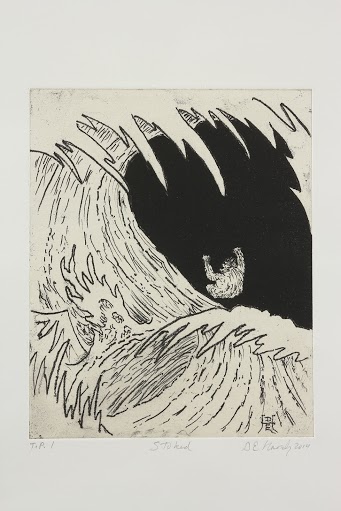 Ink fans can immerse themselves in the father of tattoo artistry, Don Ed Hardy at The Australian Tattoo and Body Art Expo at the Royal Hall of Industries, Moore Park from 13 – 15 March, 2015.

Ed’s son Doug Hardy is heading to the event next month as a VIP guest, where the expo will be showcasing an EXCLUSIVE pop up art gallery with approximately 70 original Hardy works, all of which have never been seen in Australia before. Hardy will also be live tattooing at the show, representing one of the most famous tattoo shops in the world, Ed Hardy’s Tattoo City.

Best known for his tattoo work incorporating Japanese art form and American style, Ed brought tattoo artistry out of the dark and made the transition into the world of fashion with his eponymous apparel and accessories brand Ed Hardy.

The dates are inked in and its seventh appearance in Sydney the expo is a celebration of the brash, bold and beautiful facets of tattooing and body art. The largest of its kind in the southern hemisphere, the 2014 event attracted over 16 000 visitors and featured a bevy of prominent ink masters from across the globe.

Across three buzzing days, artists will showcase their skills with live tattooing for both pre-booked appointments and walk-ups at the event. Singaporean parlour The Bold Fox will be represented; the striking portraiture of Californian tattoo artist Roman Arbrego will also be on display. Tony Cohen, tattoo artist for Rose Tattoo front-man, Angry Anderson, is returning the expo. Also joining the line-up is a number of notable Australian artists representing parlours from across Sydney and NSW

But it isn’t all just needles and ink – A number of vendors will be present at the expo including, Hourless Apparel and Urban Streetwear. The art, jewellery and product designs of Creep Heart by Ella Mobbs will also be on sale. You’ll be able to soak up the ambience at the bar and there will be face-painting and air-brush tattoos that’ll keep the younger, and less committed, tattoo enthusiasts entertained.

There will a number of chances to show off your ink at the expo too. Tattoo contests are being held across a spate categories including, Black and Grey, Asian, Portrait, Tribal and Neo-Traditional; as well as, an overall Tattoo of the day, each day of the event. Also, the Girls of Ink modelling completion for the tattooed beauties is returning with a $1000 cash prize and a modelling portfolio valued at $3000 up for grabs for the winner.

This colourful expo fascinated 40 000 visitors nationally in 2014 and it is set to continue growing into the future. The Sydney edition of the expo will be a great opportunity for the heavily inked aficionados and curious fans alike to immerse themselves in the colour and culture of the tattoo community.