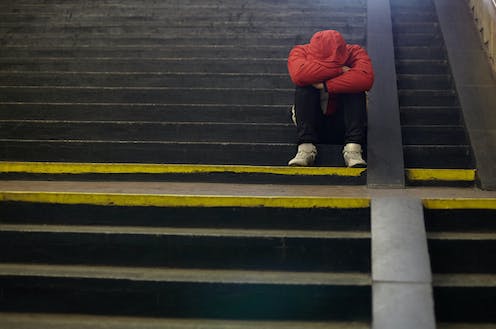 We often hear a job is the best way to get someone out of poverty. In many cases this is true, and anti-poverty strategies should prioritise improving people’s access to jobs.

But this isn’t the complete solution. For many – particularly those with disability or substantial caring responsibilities that limit their scope to work – the income support system remains crucial to avoiding persistent poverty.

It may not feel like it at a time of rising living costs, but the incomes of Australians have on average risen substantially over the last three decades and continue to trend upwards – we have never been richer.

However – as highlighted by the Productivity Commission – some in the community continue to be left behind.

Looking back over the first two decades of this century, we found around 13% of the population are persistently poor.

We defined these as people who persistently have to live on incomes that are less than 60% of the median income in Australia (a definition employed by Eurostat for European Union member countries).

Poverty then isn’t simply a temporary experience in Australia, and tackling persistent disadvantage needs to be a policy imperative.

Why do people descend in poverty – and often stay there?

Understanding what drives poverty and its persistence is an essential first step to alleviating it.

Using data from the longitudinal Household, Income and Labour Dynamics in Australia (HILDA) Survey, we examined the extent and nature of persistent poverty among the same sample of Australians tracked over time.

Specifically, we looked at

We also examined the degree to which the depth of poverty (how far someone’s income is below the poverty line) impacts on the likelihood of staying in poverty.

We found persistent poverty is more prevalent among:

This is consistent with previous studies of poverty made at a single point in time.

Perhaps unsurprisingly, those in deep poverty – the poorest of the poor – are the most likely to be persistently poor (up to five times more likely than the average person in the community).

Similarly, among those initially not in poverty, those with incomes closest to the poverty line – the poorest of the non-poor – are at greater risk of falling into persistent poverty.

Another policy priority therefore needs to be preventing those close to the poverty line falling into actual poverty.

When we examined the “trigger events” for people falling into poverty or rising out of it, we found the household’s success in the labour market is critical. In other words, people need to be able to get a job.

An increase in the number of employed people in the household is strongly associated with lifting people out of poverty.

There is also a strong association between a lack of work and the risk of persistent poverty.

Clearly, then, policy measures geared towards increasing employment, and retaining employment for those already employed, are key to reducing persistent poverty.

Another policy priority needs to be preventing those close to the poverty line falling into actual poverty. Shutterstock

It’s not just about jobs, though

But employment isn’t the only factor of importance. Any change in family type, but particularly becoming a single-parent family, increases the risk of poverty.

Who you live with, what they do, and what happens to them are important. The household perspective then is critical to understanding poverty and designing appropriate policy responses.

The onset of disability or substantial caring responsibilities is also much more likely to tip you into poverty and keep you there.

Put simply, those who are more likely to experience persistent poverty tend to be constrained in their ability to participate in the labour market. Having a job may not be an option at all.

Many of those highly exposed to persistent poverty have very constrained access to paid work, because of factors such as:

Even among couple-parent households, we found the more dependent children in the household, the lower the probability of exiting poverty.

This highlights the importance of child care assistance to facilitate employment participation and sustained income adequacy for families with young children.

Many of those highly exposed to persistent poverty have very constrained access to paid work, because of factors such as long-term health conditions. Shutterstock

But even improvements in child care assistance aren’t enough. The simple fact is that, for a significant number of people, income support will continue to determine their living standards.

The unavoidable conclusion is that boosting income support payments beyond their current austere levels remains a crucial pillar of policy for governments genuinely committed to reducing persistent disadvantage.

Unfortunately, this does not appear to be on the agenda of either of the major parties.