JAKARTA, INDONESIA - Media OutReach - 29 November 2019 - The EU-ABC, together with EuroCham Indonesia, was honoured to be the first foreign business council President Joko Widodo met since kicking off his second term as President of Indonesia. This meeting was part of the Council's annual business mission trip to Indonesia, bringing more than 35 European Companies for meetings with the Indonesian Government and leading politicians. 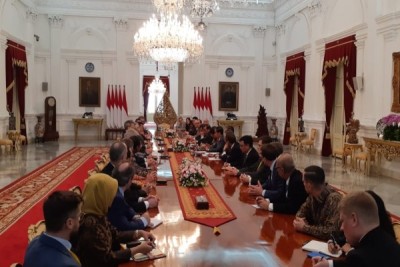 President Jokowi set out his priorities for his second term encouraging European businesses to play a greater role in the inclusive economic development of the country, particularly in areas linked to sustainability, human capital development and the Fourth Industrial Revolution.

Speaking after the meeting the EU-ABC Chairman, Donald Kanak, said:  "It was a very productive, forthright discussion. EU-ABC made it clear that we recognise the need for inclusive growth in Indonesia and expressed the desire of our members to play a leading role in the country.  Indonesia faces many challenges. Ensuring equitable, inclusive and suitable economic development, and avoiding the middle-income trap is key. Now, more than ever, European business can be at the forefront in advancing the President's development goals."

At the meeting, the President also encouraged European business to continue their engagement with Indonesia and to resolve the ongoing issues regarding Palm Oil to which Chris Humphrey, Executive Director of the EU-ABC commented "We continue to encourage both the European Commission and the countries in ASEAN to have a constructive dialogue on this issue in order to resolve the misconceptions on both sides. The EU has not banned palm oil. However, there are understandable concerns in Southeast Asia about the EU's position, which needs to be discussed and fully understood.  Equally, the EU needs to recognise the significant advances the region has made on sustainability in palm oil production."